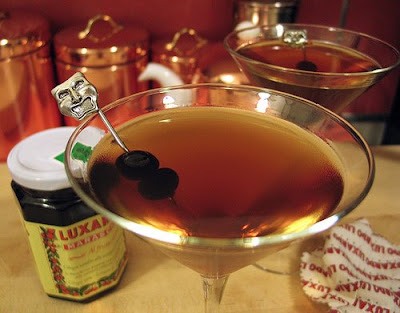 Drinking is a good time
“Drinking is about meeting new people.”
True, social drinking has facilitated many a new relationship over the years, but there is a dark underbelly to this rosy scenario. How many people have you regretfully met and gotten, um, "friendly" with while drinking in bars? Think of how many notches in the old bedpost would never have happened if you had just stayed home and imbibed in the safety of your couch.

“Drinking alone is a sign of becoming an alcoholic.”
False. Drinking alone only shows those around you (or not around you) that you're a connoisseur of the finer points of alcohol. You drink Dr. Pepper and it's strangely appealing 23 flavors alone, right? Well, drinking a 12-year-old scotch by oneself is no different--at least in our book.

“Drinking is about being with your friends.”
True. Allow us to introduce you to Johnny Walker, Glenlivet, and our seafaring friend, Captain Morgan. They are our preferred drinking buddies over you any day of the week. In fact, we’re just going ignore your calls on purpose. You’re driving us to drink with your never-ending stories about your stupid, striped-shirt wearing boyfriend and your lascivious boss who can't keep his grubby hands off the $300 table-service tequila.

“Drinking alone is depressing.”
False. What’s depressing is a bar full of cougars and up-and-coming ad sales guys groping each other and getting drunk out of their minds on Jell-O shots, Jager, and Miller Lite. How can you not smile when sipping a fine wine with your Healthy Choice chicken dinner and some Grey's?

“It’s safer to drink with others.”
False. While your friends might stop you from drunk-dialing your ex who threatened to kill herself when you broke up with her, there's is a long record of friends only making a drunken situation worse. Look at Britney and Paris. Or what about those pictures of Mel Gibson with his arms full of blondes pre-arrest? We rest our case.