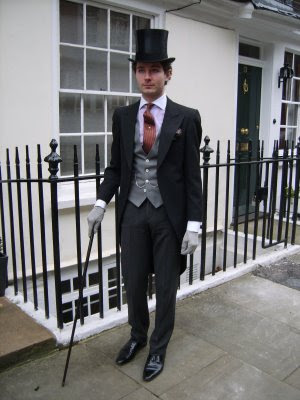 The dandy and the dilettante are siblings not only spiritually but historically. Dilettante, for all intents and purposes, enters English with the founding in 1736 of the Dilettanti Society by Sir Francis Dashwood, a remarkable figure who deserves more space than I can give him here. That he was already a member of the Sublime Society of Beefsteaks shows a well-developed sense of irony as well as a taste for the finer things in life. But Sir Francis is best remembered for founding the Monks of Medmenham, more commonly known as the Hellfire Club, an exclusive association of politicians and aristocrats that sponsored swinging parties with a Satanism-lite motif, a spiritual predecessor to the “services” of Anton LaVey two centuries later (readers are directed to Sammy Davis Jr’s autobiography Why Me?, a book worthy of a place on any dilettante’s shelves). The Dilettanti Society, however, was not another excuse for getting it on with the servants, but did serious work in spreading an appreciation of antiquities and neoclassical architecture.

Dandy enters history in the ditty “Yankee Doodle Dandy,” which can be dated to within a few years of 1770. But the person who comes to make dandyism a way of living, different from mere frippery is George Brummell, the Beau, who dominated London society for the first decade of the 19th century. An elusive man of contradictions, Brummell was in many respects the quintessence of an age in transition. Of common birth, he frequented the most exclusive clubs and counted the Prince Regent among his intimates; known for his dress, he did more than any other to redefine men’s costume as the sober uniform still seen in the business suit; so dominant a social force he could withstand a king’s disfavor, he could not defend himself from his own excesses and died in France a penniless exile.